Dr. Sharon E. Straus is a geriatrician/general internist/clinical epidemiologist; Director of the Knowledge Translation (KT) Program at the Li Ka Shing Knowledge Institute of St. Michael’s; Deputy Physician-In-Chief, St. Michael’s; and, Vice Chair, Medicine (Mentorship, Equity, Diversity) and the Division Director for Geriatric Medicine at the University of Toronto. She completed her MD and residencies in internal medicine and geriatric medicine at the University of Toronto. She also earned an MSc in clinical epidemiology at the University of Toronto. She holds a Tier 1 Canada Research Chair in Knowledge Translation and Quality of Care and has obtained more than $30 million in peer-reviewed research grants as a principal investigator. Dr. Straus has over 350 publications, and has supervised over 25 graduate students from different disciplines including clinical epidemiology, health informatics and human factors engineering. Her research interests are in evidence-based medicine, knowledge translation, diagnostic tests and health informatics. After training in internal medicine, nephrology and epidemiology Dave Sackett’s first career (age 32) was as the founding Chair of Clinical Epidemiology & Biostatistics at McMaster. In his second career he began to design, execute, interpret, monitor, write and teach about randomized clinical trials, an activity that continues to the present, some 200 trials later. His third career was dedicated to developing and disseminating “critical appraisal” strategies for busy clinicians , and ended when he decided he was out of date clinically and returned (at age 49) to a two-year “retreading” residency in Hospitalist Internal Medicine. His fifth career (and the only one he didn’t enjoy) was as Physician-in-Chief at Chedoke-McMaster Hospitals. His sixth career was as Head of the Division of General Internal Medicine for Hamilton and Attending Physician at the Henderson General Hospital. When a chair was created for him at Oxford, he took up his seventh career as foundation Director of the NHS R&D Centre for Evidence-Based Medicine, Consultant on the Medical Service at the John Radcliffe Hospital, Foundation Chair of the Cochrane Collaboration Steering Group, and Foundation Co-Editor of Evidence-Based Medicine. Retired from clinical practice at age 65, he began his eighth career by returning to Canada and setting up the Trout Research & Education Centre, where he read, researched, wrote and taught about randomized clinical trials. 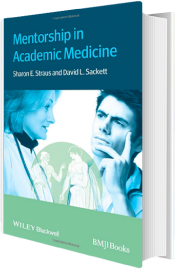